Two women and their computers

Before she was world-famous for typing words like  “cattywampus” and “onomatopoeia,” this keyboard magician was typing Shakespeare, which is a lot harder, I think!

Sure, I've been trying to acclimate you to what were the sights and sounds of London, but now imagine taking it in  wearing a giant pair of old-school headphones, and what I could only describe as “a Baby Bjorn for your laptop” to someone the other day. Oh, and not to mention while typing almost 300 words per minute. Add in flocks of staring tourists wondering “what the hell is that thing???” and you start to get the idea.
Well, that's exactly what two lovely ladies were doing while accompanying us on each of our class activities. And both of them were hilarious and a sincere  pleasure to travel with.
You see, they were providing what's known as real-time captioning (RTC or CART) for my awesome friend who was also in our traveling group. She is deaf and using these transcripts allows her to  read  exactly what is going on during the lesson as it happens, not to mention helping the rest of us out when we were a little behind as well!
You might have thought that stenography was only for transcripts in court or for journalists. But no, my friends, it is actually a very diverse job. One day you could be captioning a university lecture , the next  you could  be doing closed-captions for your favorite TV program, or hey, if you're so lucky, you might get paid to travel! One of the ladies who was with us actually specializes in captioning  live sports broadcasts. But seriously, how cool would that be if you're a sports fan?!
But, come on, let's be real here, you're  on the other side of the screen going THAT'S SO COOL! CAN I TOUCH IT? HOW DOES IT WORK? WHAT HAPPENS IF I PUSH THIS BUTTON? HOW ON EARTH DO YOU TYPE THAT FAST? And  most importantly, IF I SAY A BAD WORD, DO YOU REALLY HAVE TO TYPE THAT, TOO??  (most of the time, the answer is yes.) But seriously for as many questions  as I get about all the cool stuff my wheelchair does, I can only imagine these guys get more. And I'm sure it never gets old. At all. :P  So, allow me to explain--
The stenotype machine  is composed of 6 keys that, when pressed alone or in combination produce a different combination of phonetic sounds, so you're literally  typing what you hear, not the actual letters  and such, which allows the person to type faster. Many common words and spellings are programmed into the software, just like Siri, and if the captioner  knows them ahead of time, people's names and commonly used terms on the subject will also magically appear. In the classroom, the machine is connected to an overhead projector that has its own screen, so that people can see what is being transcribed. In our class, my friend also had her own laptop so that she could see it, but everyone else didn't have to if they didn't want to.
My big question was “ Okay, I know it will be fine in the classroom, but what are  they going to do when we go on all those walks and stuff? What about the equipment?”  I know this because in my previous work I often had to confirm and arrange equipment for captioning at some of our events. Well, my questions were soon answered. One of the captioners  had invented this device that looked like a lap tray with a harness that she could wear on her shoulders and keep the stenotype  machine inside it, so that my friend (and all the rest of us!) could read along when we couldn't  understand Professor Fosdal in the very soft-spoken but gruff voice of a proper English gentleman:

became something we could actually understand because the captioner had noise canceling headphones and a wireless microphone on the professor.  And it also kept the  other professor from rambling once he knew that everything had to be written down. It was kind of funny. As for me, I was just happy I had won the honor of having my name programmed in the machine. That's kind of a big deal. Usually, when someone in class made a comment, it just said “student 1” or “audience” or something like that. But apparently I talked so much in class or they just knew that she liked me, so I guess it was okay :-).
All  jokes aside, it just made me happy that there were multiple forms of access on this trip. As much as I would complain about the physical access to somewhere, it was nice to also have to think of someone else. As she is the one who encouraged me to pursue this entire experience when I thought that applying to study abroad would be too overwhelming for “someone like me,” I wanted to think about her and make sure she had everything she needed as well. The nice thing about this was that when they asked about theater accessibility for captioning, they also asked where the wheelchair seats were as well. It was kind of nice not to be the only one, one of several, in fact. But, it was amazing to have an advocate and some understanding in these ladies. And besides that, they were just   fun  to talk to, very kind, and a wonderful presence on our trip.  To the two of you, I am still in awe of the speed and precision with which you did your jobs and your ability to keep up with all of us, both physically and mentally. It  is still magical to see my words appear on the screen as they are coming out of my mouth (and not from my own doing). I wanted to acknowledge you not only for the work you do but for the unique situation that you put yourselves into while traveling with us and how it changed our whole experience. I'm sure I'm not the only one who would agree. Thank you. 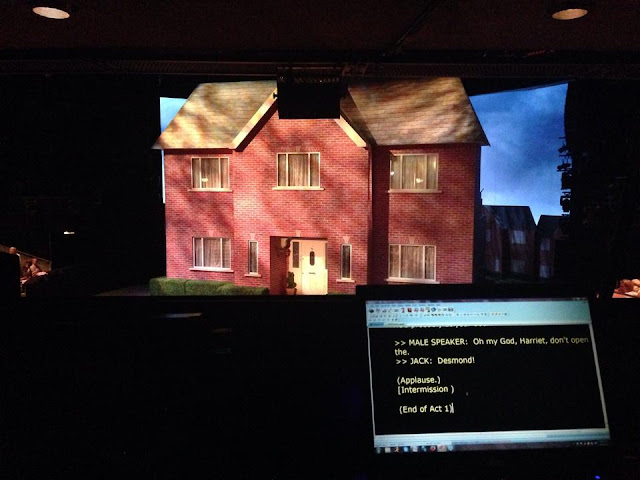 Thanks to my lovely friend Jessie for this photo! You're the best! Image: a view of the main stage of “A  Small Family Business” with the exterior of a red brick two-story house. In the foreground is a darkened room with the screen of a laptop computer on the right side. It says:
>>MALE SPEAKER: Oh, my God, Harriet, don't open the
>>JACK: Desmond!
(Applause)
(Intermission)
(End of Act 1)

The Pen is Mightier Than the Sword