A bill of rights as an autonomous disabled person

So let's take a trip to the present here for a little bit...

Many of you may know that I am now in the interesting phase of entering the real world, let alone now finally dealing with the systems in a city where I have completed my undergraduate career.  For a person who has needed assistance from other people for most of my life, you would think I would have some idea how to do this process or at least how to get started. In the past, I have always been respected as a crucial member of a team that planned my care as soon as and possibly even before it was appropriate. As such, I am used to meeting with and coordinating with many different people so that I can go about my day as I need to. While I realize that this might be somewhat of a unique situation, I still amazed at the amount of stereotyping that goes into creating policies for people like myself, who wish to self direct their day but need assistance doing so. At this point I am trying to take the steps to have the most independent option possible but there are a lot of things that I found out do not go without saying in terms of how people interact with me every day.


I don't understand why consumer directed support is not a universal thing and why it is so hard to set up. You'd think it would be the easiest thing to access as an alternative to a nursing facility. But somehow the people who know what they're doing always end up working for large companies that don't acually have a good reputation for client services, instead of allowing the client access to a large network of people with the credentials they need to help them. While I think it should definitely be considered as an option, it is definitely not the only option to go through an outside entity for management support as my personal experience and the experiences of many of my friends can attest to. Not only is the quality of client services severely impacted, but also the quality of the environment for the people who work there. Don't get me wrong, I've had some fantastic experiences, but largely I find that if you don't live with some type of disability you don't understand what it's like if  somebody
forgets about you one day, or says there's nothing they can do for you. Now, imagine what that's like every day on and off for a month. This is not your Excel spreadsheet, these are our lives.

Pastries, subways, and cab drivers. Or, adventures in Paris 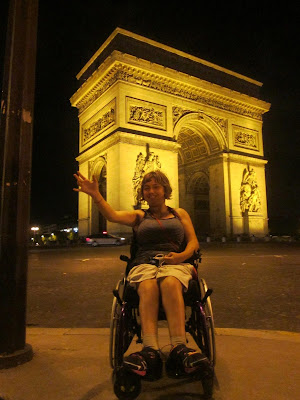 (Image: Me sitting in front of the Arc de Triomphe with my arm outstretched like I'm trying to be Vanna White. The picture was taken at night and I am sitting in my chair wearing a striped tank top and shorts) 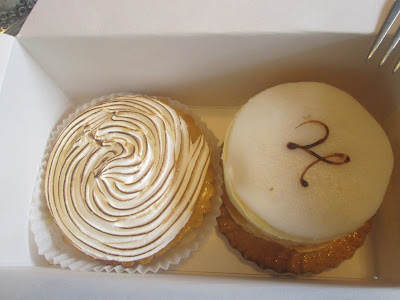 (Image: Two pastries in a box. The one on the left has lemon meringue with circles of whipped cream and designs on the top. The one on the right is a pear tart with what looks like a cursive letter 'H' on top.) 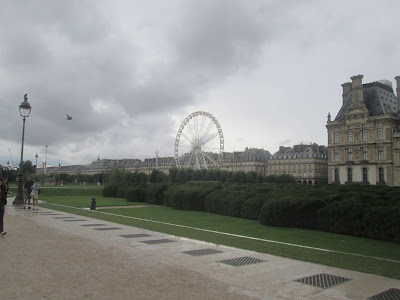 (Image: A view of the palace outside of the Louvre on a rainy day. A palace is visible along with a ferris wheel on a slight angle.)
Posted by Hannah at 2:28 PM No comments:

Email ThisBlogThis!Share to TwitterShare to FacebookShare to Pinterest
Labels: London

“A Small Family Business”… and a cold!

It seems kind of odd to take a minute now and think back about how you, as an American, would spend the Fourth of July in a place like London. Of course, we were supposed to have many interesting adventures like a tour  of the National Theatre, but due to renovations, this was canceled, so we spent the day doing what any self- respecting tourist would do–shopping!
The only thing  of note about this day was the fact that I had a splitting headache and would fall asleep once again on my second trip to one of the world's biggest tourist attractions, the London Eye. Because of access passes, I was able to bring my lovely friend along for  a discount, and  thankfully she only spent about half the time making fun of me for falling asleep. (Yes, mom and dad, the traveling narcolepsy strikes again!) I do remember being awake for the picture, but it didn't turn out well.
We had a nice dinner together and then we all had an assignment  that night. “A Small Family Business” was a very humorous play about a family that gets caught up in its own lies about money laundering and what happens after that. Though after seeing such stunning shows  with spectacular special effects, this play usually ranked as everyone's least favorite, even though I seem to recall it won  an Olivier award (for you Americans, that's like the Tony award). I knew at this point I was  struggling to pay attention to things such as set design and delivery of acting, when of course I ended up sitting right next to the professor. A couple weeks prior, they told us that about half of us would get sick because we weren't used to the bacteria in the food and water. As everyone else was interested in snacks during the intermission, I was interested in not sneezing on the professor or the actors. Lo and behold, for me, that day was today. But, I had no time to rest, for I had a  journal due that night, as that weekend was the predetermined adventure in Paris. I was sick as a dog, but I'd be damned if I had to get a refund  on those tickets! How the hell we were going to pull that off, I had no idea…

Stay tuned for the adventures that followed in my next post!
Posted by Hannah at 7:42 PM No comments:

Email ThisBlogThis!Share to TwitterShare to FacebookShare to Pinterest
Labels: London

Do you ever wonder what a water closet smells like? Or Hampton Court

Our next adventure saw us running for the train as usual, this time in what would be one of the creepiest stations at night, because pigeons could fly in  from the ceiling. Victoria station was surrounded by construction detours and left us with minutes to spare. All I remember was yelling “run Forrest, run.” We didn't have to find an alternative this time.
And so, we were on our way to the lovely little vacation palace of Hampton Court.  After being built, it was gifted to the wealthy landowner Sir Thomas Wolsey, who then got in a fight with  Henry VIII, who, of course, was mad that the church would not give him a divorce, and anyone who disagreed with him fell from favor, including Wolsey himself, later. I can't remember how much of the history went after that, but I do remember  that you could see several different eras of architecture within the palace walls. One really cool thing I remember is that the Hampton Court kitchen was among the first to develop some kind of refrigeration system for the meat, thus enabling it to be kept longer and could serve larger and more elaborate banquets in the dining hall. I remember something like an advertisement for a 100 course meal that had once been served there.
Hampton Court  itself was known for the architecture of the Tudor period, which included a lot of wood paneling as well as gold leaf and gold plating on the walls and ceilings. This was also the era of frescoes to be painted on the ceiling, some of which usually involved a lot of breasts as was aptly noted by our instructor.  One cool thing about the palace was that I had to take elevators which allowed  us to access certain back corners of the palace that our classmates didn't get to see. I remember one of them had many spears on the wall and a weapon that looked like some kind of club spikes coming out of it. Another interesting thing is that spikes were installed out of the corners of the stone archways and in certain areas to prevent vagrants or homeless people from sitting or sleeping there.   Apparently you did not want to mess with the Queen.  But seriously, the King's quarters and the Queen's quarters  had some of the most ornate rooms I have ever seen. I remember that the room  they had an audience with you in was based on your importance, so the more important you were, the more sitting rooms you got to see.  My favorite room  was a room with sculptures made entirely out of cloth napkins. You probably think I'm weird, but it was awesome!
We also were able to go outside  for  a tour of Queen Mary's Gardens.  I remember she liked to sculpt the hedges in interesting ways, some to look like mushrooms or Hershey's kisses.  At this point  we were outside, and all anyone could think about was ice cream and I remember everyone just laying on the lawn or under a tree, talking about life.  It was a great end to an  extremely runaround day.
Oh, and in case you're wondering about the title of this post, you don't want  to know, it was horrible according to the scratch-and-sniff map they gave us at the end of the tour. I learned that's probably why people covered themselves in lavender and rose water! 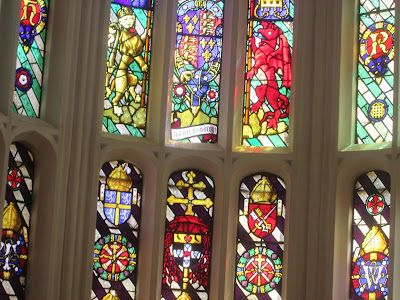 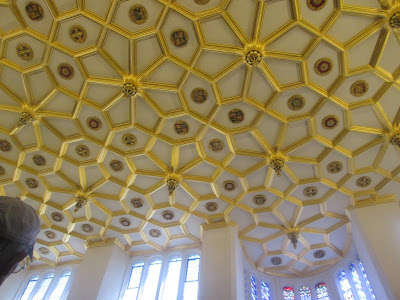 (Image: a gold plated  ceiling design from the Tudor era made in a geometric design  that appears to resemble rhombuses or flower petals.) 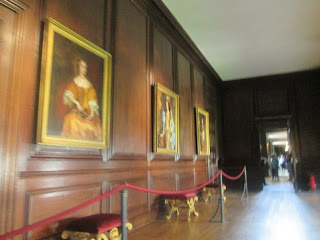 (Image: a photo looking down the hall of one of the main portrait galleries, all showing women, presumably other royals. It is rumored that some of these halls are  haunted by the ghosts of the women in the paintings.)
Posted by Hannah at 7:23 PM No comments:

The Pen is Mightier Than the Sword